It’s been almost a decade since the Amstel Quartet blew its first notes. Since then, the four young and enthusiastic saxophonists who make up the ensemble have built an international reputation in the world of chamber music, and beyond.

They met while touring with the Dutch National Youth Orchestra and in 1997 decided to form a quartet where they could test the boundaries of the conventional saxophone repertoire of the time.

But first – what to call the quartet? The Amstel River is not only the historical birthplace of the city of Amsterdam, but also an ever-changing waterscape, reflecting the changes in life along its shores. For a quartet grounded in the traditions of chamber music, but ready to meet new and ever-changing creative challenges, the Amstel Saxophone Quartet was the obvious choice for a name. After a few years the name evolved even further, to today’s Amstel Quartet.

With talent, creativity and a new name, the Quartet was on the road to success.

The repertoire of the Amstel Quartet is original, its performances personal. From the mystery of Bach’s Second Cello Suite in D to Michael Nyman’s theme for the film, The Piano, the four saxophones unleash a new energy with each arrangement. The Amstel Quartet has the technical confidence to tackle the most difficult piece from Iannis Xenakis and the versatility to collaborate with artists from other disciplines – such as dance, musical theatre, mime and cinema.

When a member of the Amstel Quartet listens to music, he is always wondering: How can our saxophones transform this piece? Such was the case with the Arabian Waltz by Rabih Abou-Khalil, never before performed by a saxophone quartet. Adaptations and arrangements by members of the Amstel Quartet have won recognition and praise by many composers – György Ligeti, Philip Glass, Michael Nyman, Peteris Vask and Arvo Pärt to name but a few. And they’ve brought new life to old saxophone compositions, such as the infrequently performed Quartet by Tristan Keuris.

This versatility and talent have earned the Amstel Quartet many prizes at competitions, the latest accolade coming in the form of the 2006 Concert Artists Guild Management and Audience Awards at Carnegie Hall in New York City. In 2005 the Amstel Quartet won the International Chamber Music Competition in Illzach, France and placed second for the Gaudeamus Interpreter’s Prize. In 2004 they won the Chamber Music in Yellow Springs Competition in the United States. That same year brought them the Uitmarkt Audience Award and the Kersjes van de Groenekan Awards in the Netherlands. Before, the Amstel Quartet won the Dutch Almere Prize for Chamber Music and was prizewinner at the Gustav Bumcke Competition for saxophone ensembles in Dortmund, Germany.

The Quartet has performed in the Concertgebouw in Amsterdam; Vredenburg in Utrecht; the Sogukado Hall in Tokyo, Japan; the Stadtkirche in Darmstadt, Germany; Carnegie Hall in the US and in Ireland, Luxembourg, Belgium and the Czech Republic. 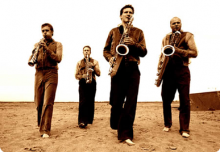